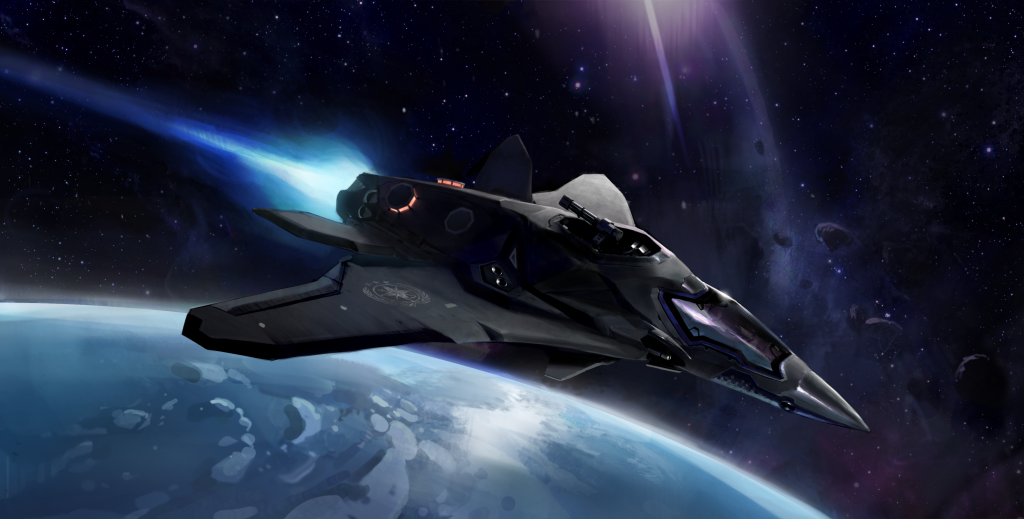 We finally have concept art for the Beewolf! This lovely artwork comes courtesy of concept artist Duncan Li, who worked on the original design, and Malvear, who finalized the piece.

The FS-26 Beewolf is a space superiority fighter fielded by the UNN, commonly deployed from Jump Carriers as attack craft and escorts. The Beewolf is a single-engine, single-pilot craft with the ability to operate both in a vacuum and in an atmosphere, and is capable of reaching orbit under its own power. It has an aerodynamic hull designed for atmospheric flight, along with arrays of thrusters that help it maneuver with six degrees of freedom in space. These also allow it to take off in a VTOL configuration, and to hover in place.

The Beewolf has an angular profile designed to reduce its radar cross-section, and features a stealth coating that absorbs RF radiation, giving it an onyx-black appearance. Along with this, its advanced heat sinks allow it to reduce its thermal profile or help vent waste heat when necessary. With the use of an onboard VR suite, the pilot can connect their flight helmet to arrays of external cameras, giving them an unimpeded view through the hull.

The craft can be configured with different loadouts to perform a variety of combat roles. These include fighter screening and escort for larger vessels, engaging enemy interceptors, long-range patrol, and ground attack roles. These armaments include a 25mm rotary cannon mounted on the cheek of the craft that fires conventional shells at 3500rpm, a belt-fed electromagnetic railgun that extends from a dorsal hatch on a flexible gimbal arm, and internal missile and bomb bays.