Now that The Autumn War is finished and everything has been released, I’m going to take a little time off. I don’t usually do this, but the project ran for over a year and I’m in need of a little R&R. I’ll take maybe a week, then I’ll start on the next project.

As a side note, sales of the ebooks have been going extremely well. We actually cracked the top 200 in a couple of the Amazon categories, which is great. Reviews are crucial at this stage for maintaining momentum and pleasing the algorithm, so if any of you guys have the time to leave a quick review or a rating, that would be much appreciated.

Hope you guys are enjoying the stories, and with that, I’ll be back in a little bit!

Set in the Pinwheel universe, where an alliance of friendly species fights a never-ending war against the merciless insect hordes, the mission to retake a lost colony is underway.
The largest Coalition fleet ever assembled descends on the moon of Kerguela, where a peaceful civilization met its end at the hands of a marauding hive fleet three decades prior. Leading the campaign is Xipa, one of the few survivors of the original invasion, bent on righting the wrongs of her past and avenging her fallen flock. When she intercepts a mysterious signal in orbit, she assembles a crack special forces team to scour the overgrown forests and abandoned cities for answers.
Evan is a seasoned Marine, deploying from the UNN Spratley as part of the ground invasion force. His armored battalion lands on the moon’s surface, ready to face the Bugs head-on, but all isn’t as it seems. In the thirty years since the moon was captured, its occupants have adapted to its environment and changed their tactics in unforeseen ways. Now, Evan and his comrades must face off against the hive’s biomechanical terrors, all the while playing a deadly game of cat and mouse with a new breed of insect.
The flames of war and passion rage around the moon, while conflict between both friend and foe strains the alliance to its limits.

After over a year in the making, The Autumn War is finally complete and ready to read! The entire series of four books is available at the storefronts listed below. If you do choose to purchase a copy, reviews and ratings are much appreciated and help me gain visibility in the algorithm.

All versions of the Ebooks are finished and ready, and the website pages have been updated with the final versions of the stories. Now, I’m just waiting for Amazon to approve their versions and we’re good to go! They usually take a couple of days so it’s still looking good for this weekend, but I’ll keep you updated.

Just a heads up, I’ve deleted the old combined Autumn War page and have replaced it with the new four volume version. These pages  are going to remain private (but still accessible to Patrons) just so I don’t mess it up and give everyone access before I’m ready.
This is temporary and the pages will be accessible to everyone again on Saturday. This whole thing is gonna take me a few days to get ready and I want everything to be available at the same time. 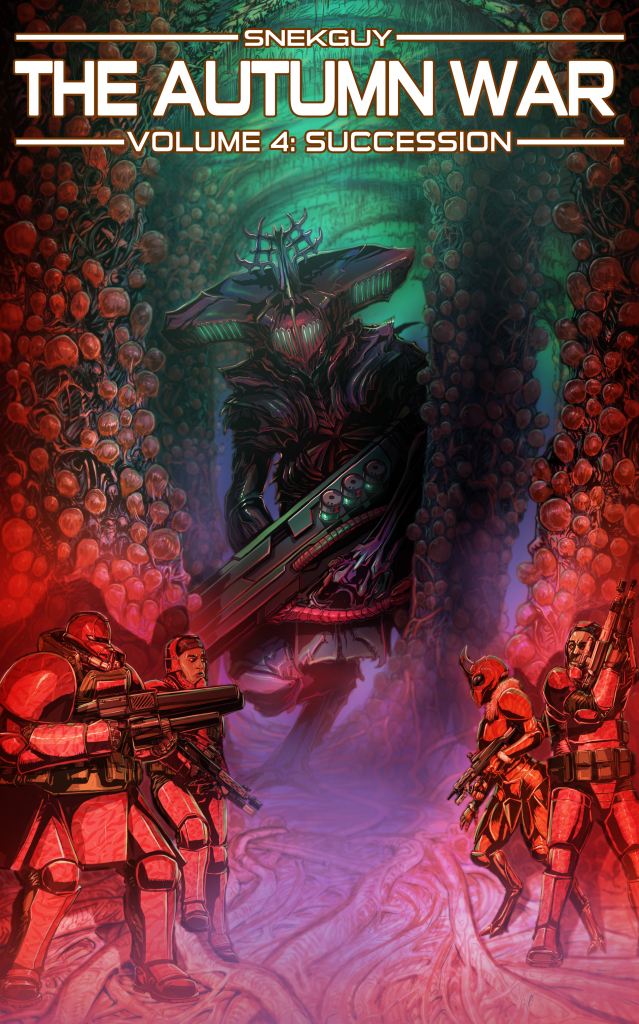 Here’s the final cover for the Autumn War. We did an extra one because I wanted something featuring more of the characters from the story. It’s also an excuse to let Joe go HAM on some more biomech Bug hardware.

I’m aiming for a release this weekend, but that’s a tentative ETA.

You can find more of SickJoe’s stuff on his page over here: https://www.deviantart.com/sickjoe

Go to Volume 2, Chapter 11: Clean Getaway if you’d like to read it from the top.
That brings the additional scene to 6,000 words, and the overall erotic content in Volume 2 to 12,000 words, which is much more balanced with the other volumes. That’s it! I gotta edit this scene tomorrow, but that shouldn’t take more than half a day’s work, then I think I’m good to start making the ebooks and prepping the website for the launch. I have to make 16 ebooks, as each platform has different requirements, so that might take me a day or two. I also have to make the four new website pages for the different volumes and add in all the links.
I’ve never been able to do a real launch before because I’ve never had covers ready before a story is finished, so I want to coordinate to make sure the ebooks are available on Amazon at the same time as the Patreon. I’m not expecting that to extend the wait, but it’s worth mentioning. Right now, it’s looking like it might be ready by this weekend if everything goes to plan, but that’s a tentative ETA.

Starting on the extra scene now. 2000 word update, new content at ‘Evan’s team made their way out of the garage’

The proofreading and grammar passes are complete, and all of my notes have been addressed. The only thing left to do is write that new scene, and it’s ready.

The Grammarly passes and proofreading phases are complete. Now I just need to go through my list of notes and make sure all the issues I recorded have been addressed, and then I can write the additional sex scene.