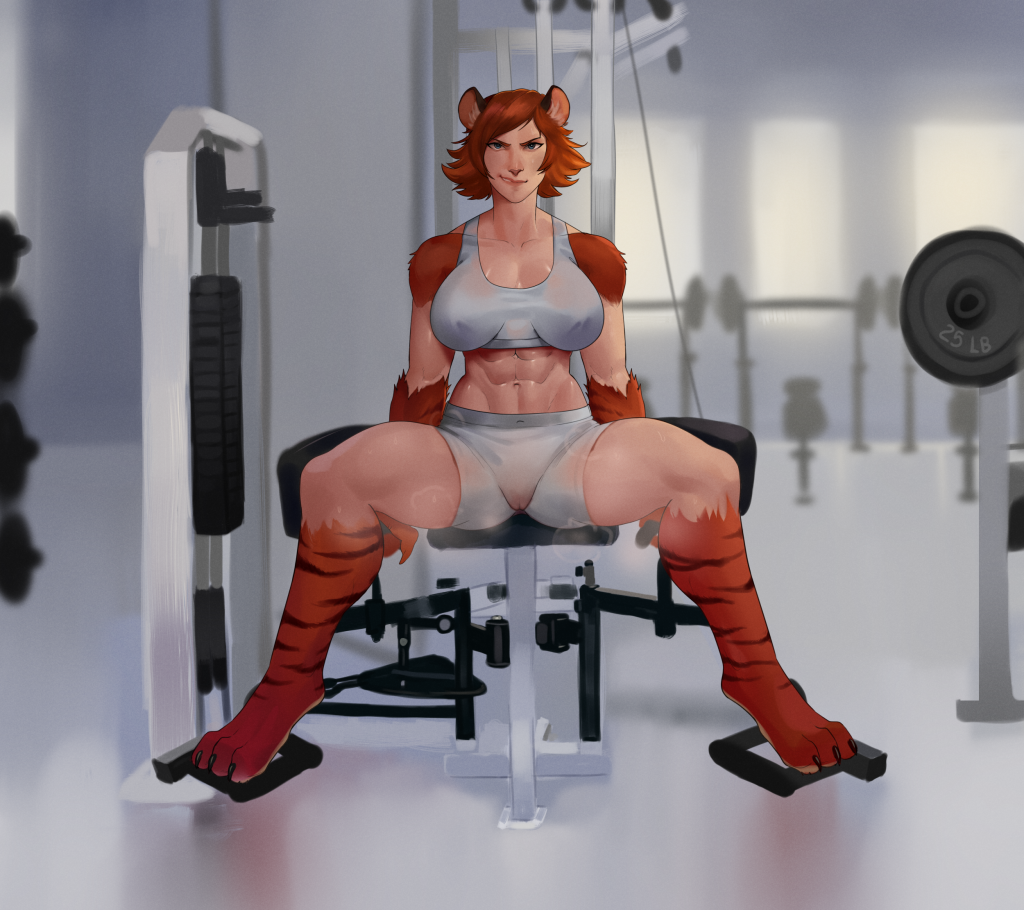 Here’s a wonderful piece of fanart that features an Equatorial hard at work in the gym. Gotta maintain that muscle mass in low-G, after all. This one was commissioned by Wheresmysocks, and it was drawn by UnknownAnimal, who has done some lovely work on some of my book covers previously.

I liked it so much that I wrote a quick thing to accompany it, which you can read below:

Teza grunts with the effort as she forces the two knee pads apart, straining against their resistance, the heavy weights on the rack beside her slowly rising. It’s more than any human could lift, but this machine is adapted for someone of her eight-foot stature. She’s already soaked with sweat from her workout session, the tight-fitting bike shorts and sports bra that she’s wearing rendered almost transparent. Her skin gleams in the harsh, fluorescent lights of the gym where it isn’t covered by her ruddy fur, its luster accentuating every perfectly sculpted contour of her body. With every subtle movement, the little beads of exertion that cling to her shimmer like droplets of dew, making her almost seem to sparkle.

You try to keep your eyes above her neck, but it’s an impossible task, and they soon start to wander inexorably downward. The low collar of her top exposes the beginnings of her cleavage, a pair of weighty breasts that are easily the size of your head fighting against the material, somehow firm and shapely in spite of their heft. She’s built for higher gravity than this. As she finishes a rep, she releases the pads, snapping her legs shut once more. You hear them clap together, the impact making her breasts bounce, her bra fighting to contain them. The garment is glued to her skin, so thin that you can see the outline of her perky nipples, along with the gentle waves that spread through her butter-soft flesh as her bosom settles.

Lower still is a six-pack that looks as though it could have been chiseled from a block of marble, her rock-hard abs flexing as she begins another set, so defined that they cast shadows on her wet skin. The motion sends a bead of sweat dripping down her midriff, guided by the channels that her muscles have carved into her belly, sliding down to pool in her navel.

Her brawn isn’t the result of a carefully-structured bodybuilding regimen but rather a necessity of her biology. At 1.3Gs, just standing on the surface of her homeworld is a form of resistance training, and she needs all of that muscle to remain agile in such a demanding environment. On the station, she has to keep up her training, or all of that muscle will start to atrophy. That means regular, frequent visits.

Your eyes roam lower, past her smooth mound, and over the tantalizingly low-cut waistband of her shorts. Those hips are a flawless hourglass, tapering into a core that looks slim in comparison but is still thick enough that you’d have trouble getting your arms around it. You can’t help but imagine hooking a finger around that waistband, feeling her slick, damp skin as you drag it lower inch by inch…

She completes another rep, the clash of the machinery jolting you out of your daydream. Teza shifts her 600lb frame in her seat as she prepares for the next set, the motion making every soft part of her body wobble, those ample breasts swaying hypnotically as she leans down to adjust the pull-pin. With another animalistic snarl, she forces the pads apart once more, almost as though she’s presenting herself to you on purpose.

Her parted legs are suddenly staring you in the face, the muscles in her powerful thighs bulging, dimpling her glass-smooth skin as she fights against the exercise machine. As hard as they are, there’s still a palpable softness to them, betrayed by the way that the elastic of her shorts cuts into her flesh. It looks as though your fingers would sink up to the first joint in fat as soft as melting butter – if only she would allow such a thing…

You can’t help but sneak a glance at what lies between them, the outline of her puffy lips easily visible – the shorts so tight that they might as well have been painted onto her like liquid latex. With droplets of sweat dripping from her thighs, she completes another rep, and you can only stare as her beautiful body springs into motion once more. Her labored breathing makes her breasts shake with the rapid rise and fall of her chest, muscles like steel cables tensing in her legs, her abs rising up from beneath her gleaming skin as though begging for your touch.

Your heart skips a beat as those azure eyes meet yours, a sly grin curling those full lips, her carnivore teeth flashing.

“When I said that I wanted you to spot for me, this wasn’t exactly what I had in mind,” she purrs as your face starts to burn with embarrassment. “Like what you see?” she chuckles, completing her last set with a resonating growl. The cushions creak as she relaxes into the seat, Teza using the back of her furry hand to wipe some of the sweat from her brow. She wets her lips with her tongue in a way that comes off as more than a little suggestive, her long tail flicking back and forth behind her like a furry snake.

“You know, I’m gonna need a shower after this,” she says as she tugs at her sweat-drenched top. “Lotta hard to reach places – lotta places that don’t play well with claws,” she adds as she flashes her hooked talons. “What do you say, dork? I could use a new packmate, and you look like you’d fit the bill.”