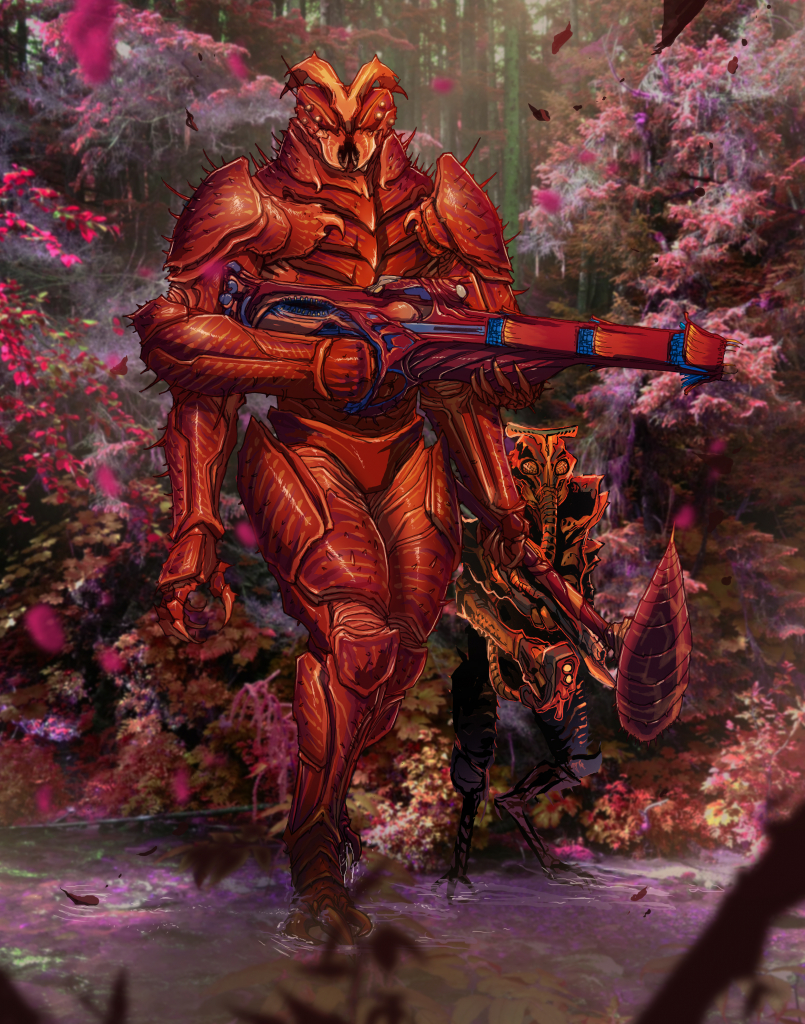 Here’s the finished artwork of the Supermajor, which comes courtesy of Sickjoe. He really went all-out on this one, so go show him some love:  https://www.deviantart.com/sickjoe

Filling the niche between Drones and organic vehicles like Warriors and Scuttlers, Supermajors are an intimidating caste that are most often encountered serving as bodyguards for Kerguela’s Field Commanders. At nine to ten feet, their enhanced size allows them to wield heavier weaponry and carry thicker armor than Drones, and also allows for more redundant organs to enhance their survivability. The moon’s relatively low gravity helps to prevent the extra weight from impacting their mobility. It has been theorized by UNN science teams that the genetic blueprint for creating Supermajors likely lies dormant in all Nuptial Fleets, and is only activated when the colony’s resources surpass a certain threshold, as a Supermajor consumes enough honey to feed an entire squad of Drones.

Like their smaller counterparts, Supermajors excel in close quarters, where they can leverage their size and strength to devastating effect. Instead of wielding the blades and knives that Drones have become known for, Supermajors favor heavy weapons like war hammers which are used to crush and impale smaller opponents.

Some of the castes encountered on Kerguela make use of weapons with chemical propellants rather than plasma, and the Supermajors are among them. The rifle that they commonly field is a high caliber anti-material weapon designed to take down light vehicles, and has a suitably devastating effect on infantry. This makes them as dangerous at range as they are in close-quarters.