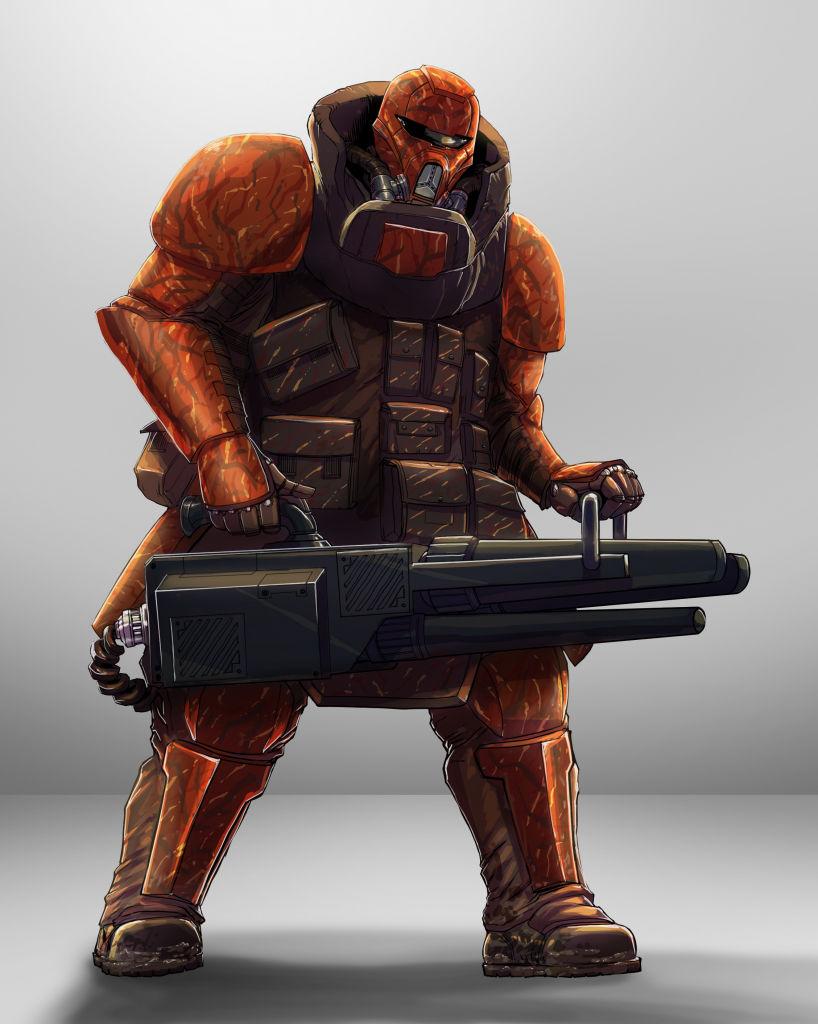 Here’s some awesome artwork of the new Trog units, as featured in the Autumn War. This one was provided by SickJoe, and you can find more of his content over here: https://www.deviantart.com/sickjoe

The Myrmidon program was a UNN initiative to develop a safer and more effective means of engaging Betelgeusians in their hives, where traditional Marine and even elite SWAR units were experiencing unacceptable losses. The cramped tunnels of a hive are fraught with dangers such as chemically-triggered mines, hidden compartments where Drones can stage ambushes, sections of tunnel that can be intentionally caved in or flooded, pitfalls, and other hazards intended to stop invaders from reaching sensitive areas of the structure.

Hardened Marine units who specialized in tunnel work, colloquially known as Trogs (shorthand for Troglodytes) heavily influenced the program’s development, bringing their considerable experience to the table. These were mostly made up of combat engineers and infantrymen who had taken up the unenviable but crucial task of assassinating Queens and destroying critical infrastructure below ground. Due to their notoriety, they retained their existing name.

What resulted was the development of specialized doctrines, equipment, and weapons that greatly enhanced the survival and success rates of their missions. Officially, Trogs are designated as combat engineers, forming elite units from especially qualified or experienced individuals who are transferred from other branches of the Navy. The process is strictly voluntary, but every Marine knows that the Trogs are perpetually shorthanded, so the call to serve is seldom refused.

Trogs are equipped with armor that was derived from explosive ordnance disposal gear, heavily reinforced to provide a high level of protection in hostile environments. It is resistant to explosives, plasma weapons, environmental hazards, and sharp implements. The suits were initially considered too cumbersome by their designers, but the Trog advisors argued that their benefits outweighed their downsides, as agility and speed inside tunnels are far less important than being able to soak up a great deal of damage. Even with the added protection, the nature of engaging Betelgeusians in close quarters on their home turf results in higher casualty rates than other units.

Trogs commonly employ XMR and XMH weapon systems configured for CQB, along with specialized microwave emitter weapons that can saturate entire tunnels with deadly radiation that excites the water molecules in a target’s body, cooking them alive. Being able to reach through thin barriers and damage both electronics and organic matter makes them especially suited to tunnel fighting, where their relatively short range is no hindrance. All Trogs are trained in the use of explosives, giving them the nickname fire ants in some circles, and they carry a large quantity of plastic explosives and grenades during their operations.